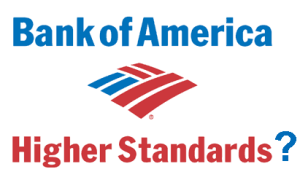 Bank of America (BOA) announced last week that it would begin cutting loan balances for distressed mortgage borrowers, and in the process created a lottery – if you’re lucky enough to be in its portfolio and smart enough not to pay your mortgage, you win.

Until now, big lenders and servicers, such as BOA, have only given principal reductions to a microscopic number of borrowers — and only then as a last resort.

But they’re now having to play catch up to a new kind of mortgage servicer — a so-called “specialty servicer” — that is seeing success in avoiding foreclosures.

They handle the worst-of-the-worst, loans at least 90 days late, and one of the tactics they have used is offering principle reductions.

Of course, few mortgages end up in the hands of these speciality servicers, and whether yours lands with one is really just the luck of the draw. But now BoA is taking the practice mainstream, and not surprisingly more loans are going 90 days late.

Unlike the person who owns your mortgage, either the bank (rarely) or a group of investors (more common), mortgage servicers are the companies that handle the day-to-day administration of mortgages. They collect payments, maintain escrow accounts and confront borrowers about late payments. They also initiate the foreclosure process when borrowers default.

Most servicer operations were set up in better times, when nearly everyone paid their loans regularly. But when the foreclosure crisis hit, they had to scramble to keep up with the added workload of managing non-performing (bad) loans.

As a result, dozens of specialty services have sprung up to take on these difficult jobs. They mostly deal with loans 3 payments or more late, which is about 5% of all mortgages, according to the Mortgage Bankers Association (MBA).

“Some lenders are so large they can’t handle delinquencies efficiently,” said Rick Smith, CEO of Marix, a specialty servicer. “They’re reaching out to [firms] that specialize in non-performing  (bad) loans.”

Plus, he added, companies don’t want to staff up for what is hopefully a temporary problem. “If you hire 500 people to handle it and then the economy improves, then you’re overstaffed by 500,” Smith said.

When can they cut the principal?

Sometimes investors purchase whole portfolios of bad loans. These hedge funds and other groups don’t service the loans themselves and their chief aim is to get the mortgages to pay off again. So they hire one of the specialty servicing firms and give them a lot of leeway to get the loans back on track.

One of their main solutions is cutting the principal balance so that homeowners no longer owe more than their houses are worth.

“Our clients would rather do a principal-reduction than an interest-reduction workout,” said Gagan Sharma, CEO of BSI Financial. “Many bought the loans at discount so they’re happy to pass the savings down to consumers.”

This encourages people to keep paying loans rather than walking away. If property values increase, the owners can turn a profit when they sell.

Conventional servicers have been loathe to cut principal because the investors who actually own the loans don’t want to accept immediate losses and lenders don’t want to encourage more people to press for reductions.

Loan Balance cut in half

It doesn’t always work out so smoothly, however, because borrowers are hesitant to return phone calls or answer letters; sometimes they think the servicers are a scam.

“We have a hard time getting people to respond,” said Vicki Lester, president of Mortgage Servicing at RoundPoint. “Borrowers are still in denial.”

To get to people they start with a call campaign and then they mail out welcome letters and information packets. “Where all else fails, we send out people to knock on doors,” Lester said.

So, the servicers remind, if you’re lucky enough to win the modification lottery, please answer the phone. Talking to someone could mean cutting your loan balance and saving your home.

Making money on a short sale?

Not every home can be saved and specialty servicers employ strategies other than principal reduction. For example, short sales — often with a twist.

Some specialty servicers have a short-sale program in which it pays borrowers a percentage of any price they sell the house for over a “quick sale value.”

For example, if they determine that a normal market value for a house is $200,000 but to sell it quickly the price would have to be $180,000, they give the borrower 3 months to sell the house for whatever he or she can get.

The servicers share with the borrowers anything over the quick sale price. Borrowers may keep 30%, even 40%, of the overage.

Now that BoA has made the practice widely known, we can expect a lot more lottery winners. So it seems that BOA is implying that if you don’t like the terms of your mortgage,  just stop paying!